In wireless communications, a recurring question is whether or not the PHY layer is dead (there was even a paper with this title in 2011). While it is my view that it isn’t (there are still interesting open questions related to, for instance, impulsive noise and also vehicular communications), there are what in all probability are more pressing questions: when and how much does the PHY layer matter?

These days, computational processing resources are cheap so it is possible to do sophisticated processing at higher layers, ranging from the MAC, to the network, and even up to the application layer. For this reason, there has been a huge development of techniques to exploit these computational resources (for example, software defined networking and network coding). Although these techniques do have limitations, they now form a valuable means of improving the quality of communication, without changing much at the PHY layer.

On the other hand, PHY layer advances cost a lot of money. Any change to the hardware used to actually send data over the air requires the upgrade of thousands of transmitting devices (or base stations). As such, to justify the upgrade there needs to be a clear business case that provides operators with incentives to make these changes.

One such PHY layer method which has been readily adopted by operators to improve quality of service has been to bring base stations closer to their intended users. Over the last 5 years, this trend has been ramped up with the development of small-cells: small, cheap and low-powered devices that can serve a small number of users. Although these devices have limited range, there are now a lot of them. This has lead to improved quality of service for users in previously difficult to serve locations (e.g., residences and areas with high user density).

In parallel with the development of small-cells has been another new idea: dynamic network sharing. As base stations have traditionally been expensive, the idea is that the costs can be shared via innovative investment structures. That is, multiple operators can share in the costs of base stations and in return have access to a proportion of time-frequency blocks (e.g., the Swedish model). Alternatively, a third-party can rollout the base stations and then lease access to one or more operators. These third-party operators are often called tower companies, with thousands in India and the USA alone.

Perhaps the most ambitious network sharing framework has been proposed by Linda Doyle and her collaborators at Trinity College Dublin. In their networks without borders proposal, they envisage infrastructure owners (i.e., owners of base stations and fibre backhaul) that can dynamically pool resources to match the instantaneous demand of operators in each region. Of course, such sharing requires the presence of contracts between each infrastructure owner and each operator. How to do this largely remains an open problem.

At the heart of the networks without borders framework and perhaps network sharing more generally is an interesting principle: only pay for what you use. Contracts of this kind naturally invoke ideas from market mechanism design, such as auctions and posted price mechanisms. These kinds of contracts are now being applied to spectrum allocation, but have not yet developed into a full dynamic network sharing framework that also includes infrastructure.

A first step to implement the only pay for what you use principle was developed for indoor wireless networks by Jan Markendahl and Amirhossein Ghanbari at KTH. In one of their proposals, third parties not only lease their infrastructure (as for tower companies), but also operate their own networks. They suggested the setup illustrated in Fig. 1, where users are served by the third party, which in turn obtains access to data and spectrum from a traditional operator (data could in principle be also provided by an ISP, but the huge volume would also require a special contract). 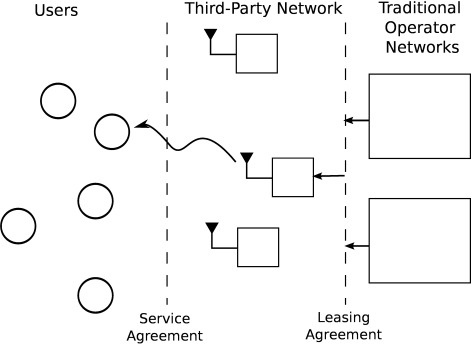 But who is this third party? And how do they ensure that their business is financially sustainable? How do they get the required fibre backhaul, efficient power sources and property in order to rollout their base stations?

To answer these questions, we can ask another: who already has these resources? Recently, with Gareth Peters, Ido Nevat, Mahyar Shirvanimoghaddam and Iain Collings, I suggested that one option is facilities; e.g., power plants, mines, universities and large residential blocks. Facilities also tend to have unusual data traffic demands, such as upload rates in stadiums. As such, facilities may not be easy to service by traditional operators and additional financial incentives may be required. So, what if these facilities could operate their own wireless networks, analogously to Markendahl and Ghanbari’s proposal for indoor networks?

These facility-operated networks would be required to purchase base stations. Ideally, they should also be able to build their network incrementally to minimize initial sunk costs and the associated financial risk. This is where small-cells can play an important role. As small-cells are cheap and are low-powered, there is a low initial investment and as the number of users increases, more base stations can be added without serious interference issues (since the network is small and easily characterized, mitigation techniques can be readily applied).

What about the contracts between users, the facility and traditional operators? In our paper, we made a proposal that took into account the very different natures of how users are served (via wireless links) and how the facility obtains access to spectrum and data (via wired links), which can be found here.

A natural question is then: how can we evaluate the network sharing arrangement. This is an important question and ties directly to our initial problem of determining how much the PHY layer matters.

In particular, the network sharing arrangement ultimately depends on the financial sustainability of the facility’s network. As such, we should consider its profitability. There are two metrics that are suggested from mathematical finance: the expected profit and the probability of ruin. In this post, I explore the benefits and drawbacks of each. For now, however, I want to return to the question how we can find out how much the PHY layer matters.

At this stage, there is no straightforward answer, especially when sophisticated resource allocation schemes are used. However, one lesson from finance provides some insight: if you have enough money in the bank, even large temporary losses can be written off. In light of this lesson, what we do know is that the financial state of the facility can mean that simple design choices payoff. How much the PHY layer matters then depends on how it affects the financial sustainability of infrastructure owners or operators. And perhaps this is the real question that wireless PHY layer researchers and designers should be asking.